An Android launcher is one of the simplest ways to customize your smartphone while still getting extra features tailored to your needs. In addition, many may offer even higher performance.

Action Launcher, which is one of the most popular among users, has just been updated and is now compatible with Android 10 gesture navigation. But there's more!

What is a Launcher?

Android smartphones, although they all have the same operating system, are mostly personalized by brands. They receive their own application icons, unique features, different forms of interaction…

This customization through the brand's own user interfaces is not always useful to the consumer. It's not always your thing and, for example, for those who frequently switch smartphones, the need to get used to another interface can be annoying. Also, there are some of them that consume too many resources without the user realizing it.

This is where the launchers come in. These are basically Android apps that let you customize your smartphone to your needs and preferences, available from the Google Play Store.

Action Launcher is a very popular and reliable option for Android. Now its creator has just released an important update that in addition to tweaks and general improvements still comes with a truly useful option for those who already have Android 10 on their smartphone. Action Launcher now supports gesture navigation.

This is a feature that is not yet available to all launchers which ultimately detracts from the user experience. So your arrival at Action Launcher is viewed very positively. 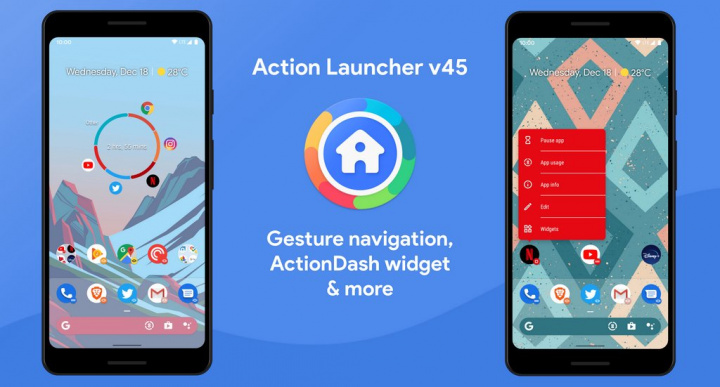 Also new is the even better integration with the ActionDash. This feature uses the Digital Wellness app from Google as a starting point. This makes it available to all Android users and offers a deeper experience with enhanced results and more powerful customizations.

In the launcher it is now possible to have a widget with all the available information on time spent using apps and manage their own usage even more responsibly.

Quicktheme live wallpapers are also supported, have built-in support for app duplication and even have unique wallpapers. Finally, of course, some bugs in the previous version were also fixed.

The launcher is available for free, however full features are only accessible through the Plus version for € 4.99.