Last year was released what is considered by many to be the best fighting game today: Mortal Kombat XI.

Developed by NetherRealm Studios, Mortal Kombat represents one of the most successful and oldest series in the world of video games, which has even had a presence in the 7th Art.

Now more than a year after the game's release, the expansion comes, AfterMath (which brings news).

(1690)
$33.99
AICHESON S035 laptop cooler is special designed to cool down up to 17.3 inch laptop. Wave metal mesh, 1000-1500RPM 1 big fan 4 small fans, flip-up sil... read more
(as of July 14, 2020 - More infoProduct prices and availability are accurate as of the date/time indicated and are subject to change. Any price and availability information displayed on [relevant Amazon Site(s), as applicable] at the time of purchase will apply to the purchase of this product.)

When it launched last year, Mortal Kombat XI, developed by NetherRealm Studios, became one of the (if not the best) action and fighting games on the market.

Featuring an appealing and exciting Story Mode for fans of this Universe, the game was accompanied with its main characters (later received some more) and with some extremely addictive game modes, such as the addictive and sometimes desperate ones, Towers of Time.

AfterMath arrived in the middle of last month and is the first expansion for Mortal Kombat XI. This expansion brought with it:

It seems (and is) a lot of content that, for those who liked the original game, will clearly be very welcome.

If you remember correctly, Mortal Kombat XI presents as the main villain Kronika, who intends to control the Tower of Time and in this way, change reality in order to erase Raiden forever.

However, Kronika needed the power of a Crown of Time (The Crown) forged by Shang Tsung. Thanks to Raiden, Liu Kang and his companions, Kronika was defeated, but the Crown, needed to restore the balance of Time, was destroyed.

AfterMath takes the story immediately after the final fight when Raiden and Liu Kang realize that the Crown is essential to restoring the balance of the Realms. Enter the wizard Shang Tsung comes up with an ingenious plan to recover it.

His idea is to go back in time with NightWolf and Fujin and get the Crown back before Kronika comes to own it. But, are Shang Tsun's plans even so?

Again NetherRealm Studios managed to create a story with an interesting storyline around their fighting game, despite the fact that this second half of the story is divided into just 6 chapters (we finished in just under 4 hours).

We wish there was more, as from a certain point the story itself becomes quite captivating and not just because of the possibility of fighting with Sheeva, Fujin or Shang Tsung. 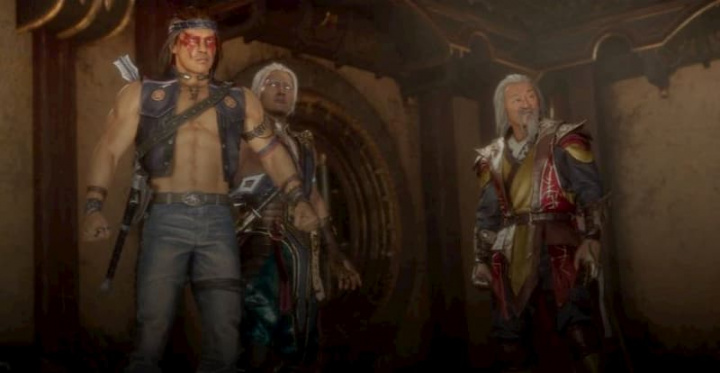 And the first two fighters I mentioned above are part of the trio of novelties that the expansion brings. They are Sheeva, Fujn and RoboCop (crossover with the RoboCop series).

(114)
$39.99
Advanced 75% Alcohol FormulaDISPOSABLE WIPES: Contains 4 packs of 50 disposable, sanitizing wipes, each wipe is 5.9” x 7.9” sheetsALL PURPOSE WIPES: H... read more
(as of July 14, 2020 - More infoProduct prices and availability are accurate as of the date/time indicated and are subject to change. Any price and availability information displayed on [relevant Amazon Site(s), as applicable] at the time of purchase will apply to the purchase of this product.)

We really liked these new characters (only the first two are in Story Mode, of course) and we can say that these are excellent additions to Mortal Kombat XI.

Fujin, the brother of Raiden and God of the Wind, is one of the new characters who debuted in Mortal Kombat in the distant Mortal Kombat 4. Fujin can use his powers over the wind to launch attacks from afar, as well as using his sword for more proximity attacks.

In this way, he is a balanced fighter, but with a preponderance in the use of his wind power to keep enemies at bay.

Sheeva is the character I liked to play with the most. Belonging to the same race as Goro, the half-humans and half-dragons Shokan, and his debut appeared in Mortal Kombat 3.

(3520)
$49.99
Ships from USA.[ADVANCED TECHNOLOGY FOR EXCELLENT PERFORMANCE] iHealth No-Touch thermometer is backed by testing validated. We provide 3 Ultra Sensiti... read more
(as of July 14, 2020 - More infoProduct prices and availability are accurate as of the date/time indicated and are subject to change. Any price and availability information displayed on [relevant Amazon Site(s), as applicable] at the time of purchase will apply to the purchase of this product.)

Its 4 arms are powerful traps that can quickly shatter an enemy or catch him in midair. Great for attacks and proximity defenses it also has powerful attacks involving jumps, like the Jump Crush that allows you to use your brute force to take down enemies.

Finally, Robocop, a character we all know, is a crossover (there have been several in the past, like Joker, for example) and which, despite not belonging to the story mode, enters Mortal Kombat XI Aftermath just for the fun.

Although it was fun to play with Robocop (with the voice of the actor in the movies, Peter Weller), it didn't completely convince me.

It is, for obvious reasons, slower, and has powerful ranged attacks, making use of your weapon or your Assault Rifle. Your armor also gives you some extra protection.

(8909)
$6.99
​ Disney Pixar Toy Story alien character figures in movie-inspired relative scale!​ They come in adorable poses with iconic 3-eyed faces for authentic... read more
(as of July 13, 2020 - More infoProduct prices and availability are accurate as of the date/time indicated and are subject to change. Any price and availability information displayed on [relevant Amazon Site(s), as applicable] at the time of purchase will apply to the purchase of this product.)

There are two very interesting comebacks in Mortal Kombat XI that make fighting a lot more exciting. On the one hand we have Stage Fatalities that allow us to use elements present in the scenarios for special attacks. It is a return that was needed and that most players appreciate.

On the other hand, Friendships are also returning. Although there are those who claim that Friendships distort the essence of Mortal Kombat, which wants violent and brutal Finishes as always, this inclusion does not harm or hurt the gameplay. In fact, it makes the game more unpredictable and, why not, in a good mood.

AfterMath is not just a mere pack of fighters. It adds a lot of content to the original game, enriching it and making it more robust, justifying its existence that way.

(10641)
$7.99
[For iPhone 11 Pro Screen Protector]: 3 Pack High-Definition & Thin Tempered Glass Screen Protector for iPhone 11 Pro (Released 2019), iPhone X (2017)... read more
(as of July 14, 2020 - More infoProduct prices and availability are accurate as of the date/time indicated and are subject to change. Any price and availability information displayed on [relevant Amazon Site(s), as applicable] at the time of purchase will apply to the purchase of this product.)

New fighters, new scenarios, the continuation (albeit a short one) of History, Stage Fatalities, Friendships, character customization options, … are more than enough arguments for Mortal Kombat XI fans to come to appreciate this expansion as well.

AfterMath can be purchased in several ways: