The smartphone segment is constantly evolving and competition does not want to slow down. The most recent and powerful presentation was made by Samsung, continuing its Galaxy S line with the Galaxy S20 series. This time, in addition to the base model and the Plus model, there was still room for a “Ultra” surprise.

The Plus version has been the subject of intensive analysis during the past few weeks and today we give you to know everything about it.

Unlike the Galaxy S10 +, the Galaxy S20 + no longer offers the user the possibility of having up to 1 TB of storage, since it is only available in the 128 GB version. It is likely that the 1TB version has not been in high demand, since neither the Ultra version offers it. Still, there is only a 128 GB version for the S20 + that seems to me frankly insufficient.

It is important to mention that there are versions equipped with Snapdragon 865 (7 nm), but they are not available for our market, as it is common to happen. 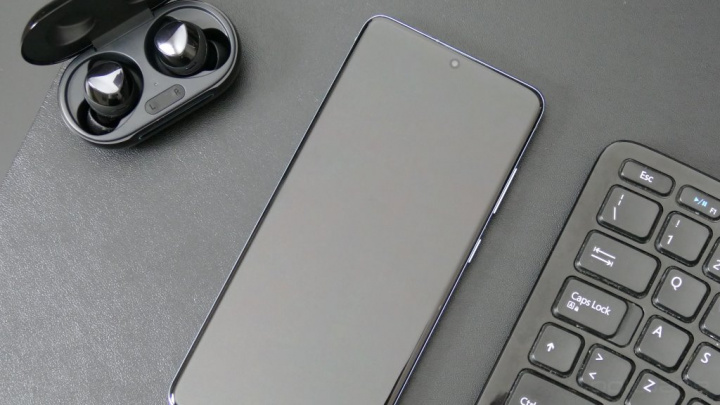 The "Infinity-O" screen is even more infinite and the "O" is positioned in the center, just like in the Galaxy Note version, something that causes less distraction than in the S10 + version. This screen is 6.7-inch Dynamic AMOLED 2X, with a resolution of 1440 x 3200 pixels. Considering this native resolution, the refresh rate is 60Hz, but in FullHD a refresh rate of 120 Hz is achieved.

It should also be noted that the screen has a 20: 9 aspect ratio and a dot density per inch of 525 dpi.

The chambers appear renewed. The Samsung Galaxy S20 + arrives, therefore, with 5 cameras, each one with its specifications and purpose. Thus, at the rear there are 4 cameras and at the front only 1. 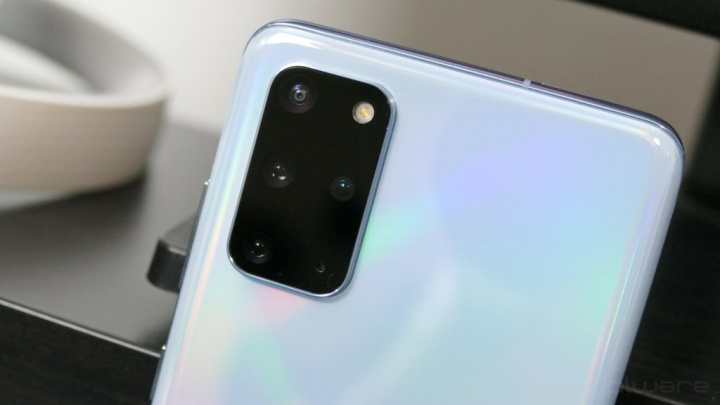 The Galaxy S20 starts a new era in the S line … the end of the 3.5mm audio jack. It is not exactly a novelty associated with the top of the range. Additionally, still on the sound question, it comes with two speakers that reproduce sound in stereo and, in addition, it also offers Dolby Atmos technology with AKG sound. Note that the speaker placed above the screen goes largely unnoticed in the structure.

In addition to the two common microphones it offers, on the upper and lower sides, it also comes with a third microphone, positioned on the rear camera module. What is not new is the good sound quality captured by this set of microphones. 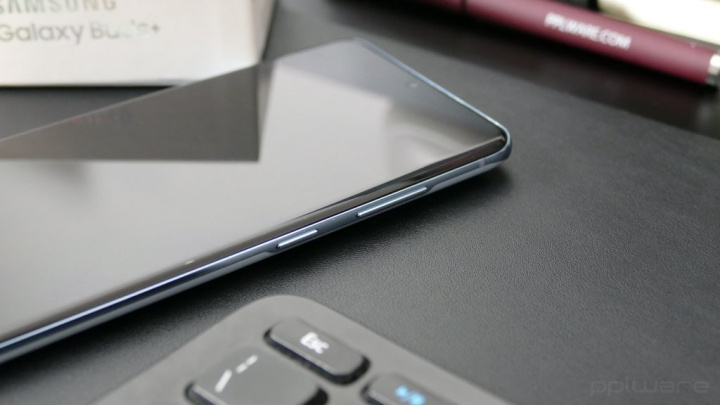 The S20 + comes equipped with Wi-Fi 802.11 a / b / g / n / ac / ax, Bluetooth 5.0, USB type-C 3.2. There is also the ultrasonic fingerprint sensor integrated in the screen, the accelerometer, gyroscope, proximity and brightness sensors, compass and barometer. Again, it’s worth noting that the heart rate sensors and SpO2 have been abolished from Samsung smartphones.

Finally, the battery is 4500 mAh with fast charging technology at 25 W and wireless charging at 15 W. Furthermore, it also allows you to charge other wireless devices at 9 W via Wireless PowerShare.

The content has not been changed compared to previous models. It comes with:

When you take the Samsung Galaxy S20 + for the first time, its lightness is highlighted, as well as the screen with very low margins. It should be noted that the smartphone weighs 186 g and has dimensions of 161.9 x 73.7 x 7.8 mm. As for the screen, it is 6.7 inches, occupying a front area of ​​90.5%. It is true that this occupancy value of the screen on the front panel has already been exceeded, but it is still an excellent feature for this Samsung. 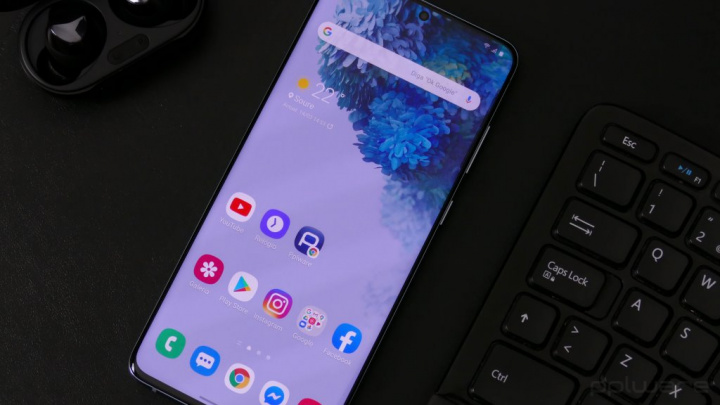 The Samsung Galaxy S20 + has a glass and metal construction. The front and rear glass have Gorilla Glass 6 protection. In addition, Samsung again applies an extra protective film on the screen. The metal structure is painted in the color of the back cover, in this case blue. In addition to cloud blue, Samsung launched two other colors for this model, gray and cosmic black. 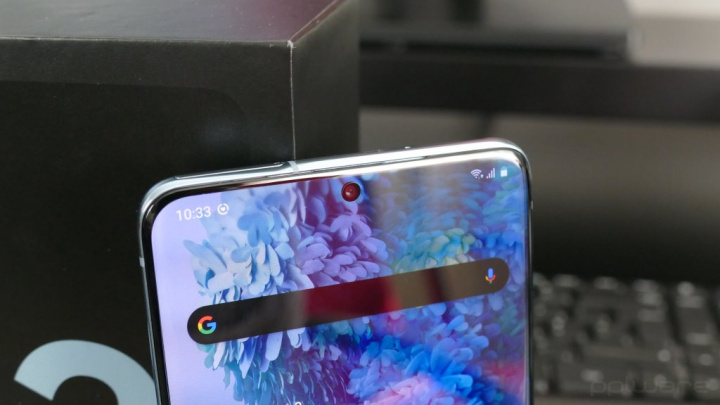 Following the Note line, on the screen the camera appears in the center at the top, a pleasant position that does not jeopardize the viewing of multimedia content.

A look from the sides

As with Note 10, the button exclusive to Bixby no longer exists. But the assistant is still present, with a language in Portuguese, even if from Brazil, and to activate it, just a long press on the Power button. Next to this Power button comes the volume button.

Continuing to browse the sides of this smartphone, on top is a microphone and the card slot (nano-SIM + nano-SIM / microSD). Below is another microphone, the USB Type-C port and a loudspeaker. The second speaker is placed between the screen glass and the metal structure in an extraordinarily discreet way.

Finally, it remains to look at the rear. The curved lines accompany the edges of the glass and the main highlight is the camera module, completely redesigned compared to previous models. This module includes the four cameras, an LED flash and a third microphone. 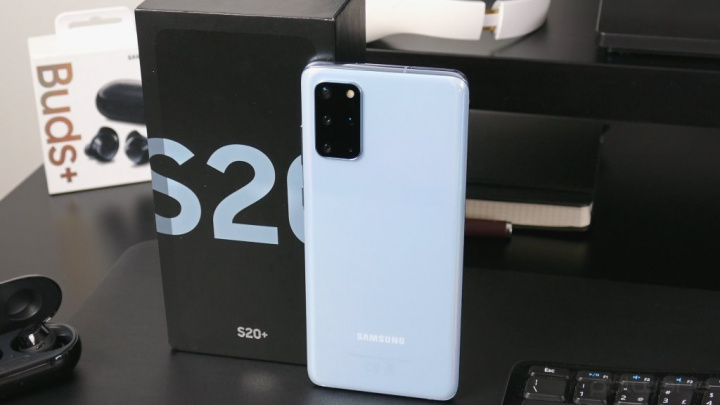 It should be noted that, imperceptibly, the screen also includes the fingerprint sensor and the luminosity and proximity sensors.

As already mentioned, the S20 + comes with a 6.7 inch screen, with Dynamic AMOLED 2X technology. Offers HDR + and Always-on Display. So far there is little new. However, in this smartphone we have a screen with a refresh rate of 120 Hz, when configured in FullHD resolution. In QuadHD the refresh rate is the usual 60Hz. 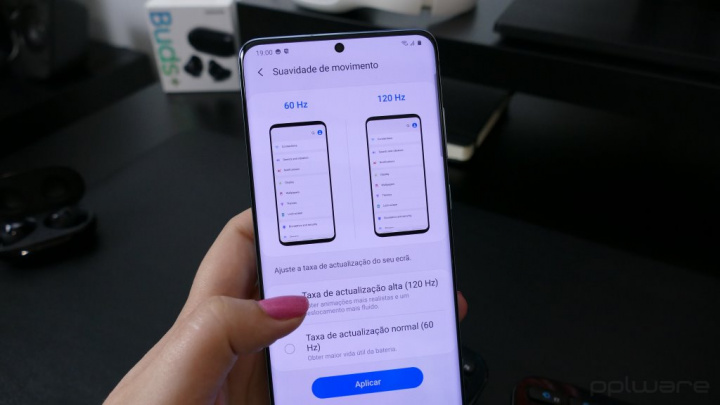 The high refresh rate makes the movements and animations on the screen appear even more fluid and realistic.

But is it notorious to the naked eye?

In fact, for many this may not even be such a noticeable difference. But the fact is that the difference is really noticeable, especially in the game environment.

The Fingerprint Sensor and security

Face recognition is done only by capturing images from the camera, that is, it does not include the known sensor system of more advanced facial recognition systems such as those from Apple or Huawei. For this reason, it is not as secure a locking system as the others available, since a photo, video or simply a face of a similar person can be used to unlock the smartphone.

You can better understand how it works through the following video:

The fingerprint sensor, on the other hand, proves to be a very safe unlocking method, since it is not limited to the information of the first layer of skin. The 3D nature of this capture technique makes it an even safer alternative to capacitive sensors.

Samsung One UI 2.1, an improved interface and top performance

One UI is Samsung's Android-based user interface. In this case, we have Android 10 and version 2.1 of One UI.

This user interface has improved in some essential ways. Firstly, we have a cleaner interface making access to content faster and more accessible. These details are seen essentially in Samsung applications.

Then, there was an improvement in the information presented by the notifications during content playback or during games. 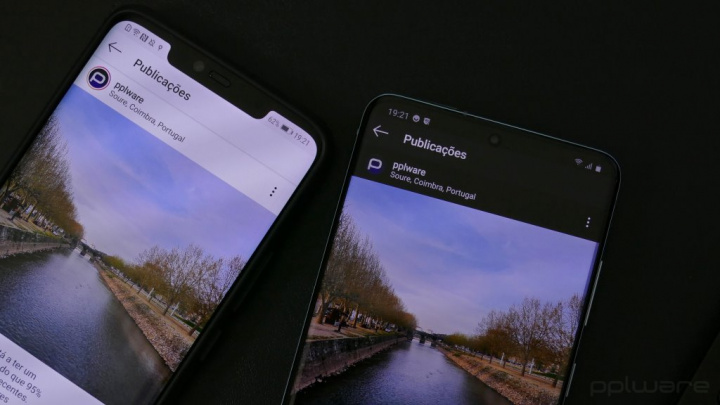 Dark Mode has not been forgotten. Obviously it is present in more apps. In addition, there are energy management modes and good usage practices that adjust the brightness of the screen and the colors reproduced. With this, I can already speak about Digital Well-Being, which presents several adjustments in this aspect. But, of course, it will bring the user even more advantages when using the smartphone consciously.

The fluidity of this smartphone and this interface are incredible, which leads me to evaluate the performance on a very positive note. There is no negative aspect to point out. At…