As we have indicated here or here, Private Division launched on June 16, the strategic shooter, Disintegration.

According to Marcus Lehto, founder of the V1 Interactive studios that developed the game, “Disintegration is a futuristic game that mixes the traditional with new ideas.”

(4676)
$199.99
Save up to $99 on a full-featured Fire HD 10 tablet (not a toy), 1 year of Amazon FreeTime Unlimited, a Kid-Proof Case with built-in stand, and 2-year... read more
(as of July 6, 2020 - More infoProduct prices and availability are accurate as of the date/time indicated and are subject to change. Any price and availability information displayed on [relevant Amazon Site(s), as applicable] at the time of purchase will apply to the purchase of this product.)

Marcus Lehto, founder of V1 Interactive, was one of the minds behind Halo, so it will be fair to say that he was a pioneer in many respects when it came to fictional shooters.

Lehto wanted to do something new that would present a compelling narrative built around mechanics that had never been made before. Disintegration is born of this desire. 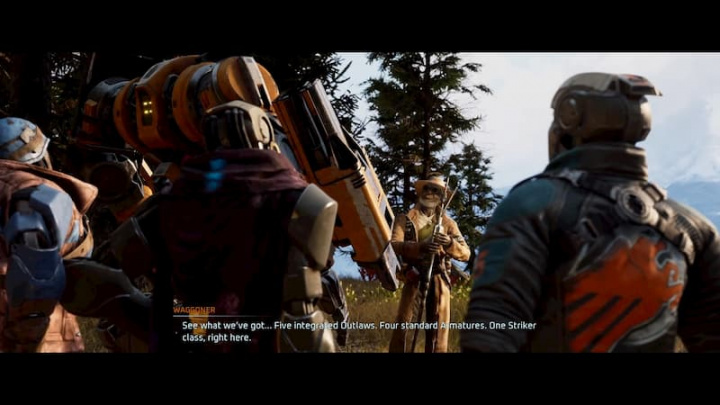 The story of Disintegration takes place in a futuristic and chaotic world where resources are few and the fight for them is deadly. In order to save humanity, a survival process known as Integration was created, in which a human brain is transferred to robotic armor.

From the ensuing chaos, an aggressive militaristic group (Rayonne) took control and began to impose the integration process that was optional, to all to consolidate their power. Only a few rebels are fighting the state of affairs.

In the game, we control Romer Shoal, a rebel who is an incredibly skilled gravcycle driver (Disintegration’s vehicle; a mix of Iron Man with Star Wars Speed Bike). Romer leads a small group of rebels against Rayonne.

Disintegration presents a relatively long and interesting campaign in which Romer tries to destroy Rayonne and free humanity from the integration tax process.

The campaign advances in the form of individual missions, taking Romer and his companions to different locations on the planet (forests, ruins, cities) in search of resources, saving other characters, destroying facilities or other diverse objectives. 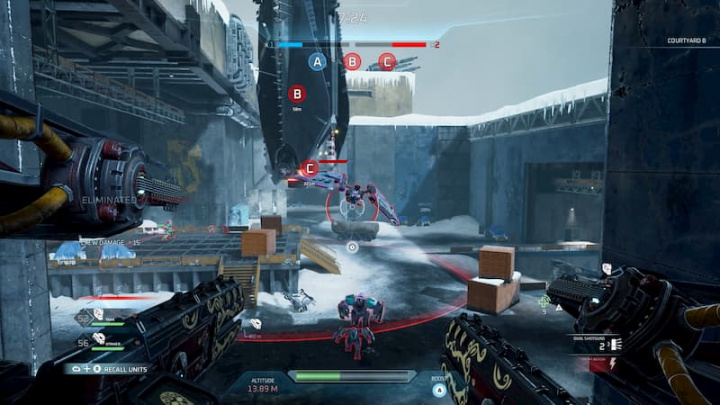 (3886)
$14.97
UA Tech fabric is quick-drying, ultra-soft & has a more natural feelMaterial wicks sweat & dries really fastEncased elastic waistband with internal dr... read more
(as of July 7, 2020 - More infoProduct prices and availability are accurate as of the date/time indicated and are subject to change. Any price and availability information displayed on [relevant Amazon Site(s), as applicable] at the time of purchase will apply to the purchase of this product.)

There is a secret location, which serves as a hub and where we prepare the missions. It is also here that we are allowed to do some kind of upgrades to our companions and even know them better by talking to them.

However, in a somewhat strange way, the V1 Interactive team decided to withdraw the option to manage our party before each mission. Thus, we are subject to predefined companions, and the absence of choice is limiting.

And it is precisely when we begin the first mission that we notice the surgical and innovative finger of those who already have years of experience in the genre, as is the case of Lehto. This is because the game presents an innovative concept mixing real-time strategy with flight simulator and FPS.

Explaining it better. We control Romer from a first-person perspective while driving his GravCycle. With this, Romer can fly (although there is a maximum limit to the altitude he can reach).

(13923)
$19.52
48 pack of Energizer MAX alkaline AA batteries; Nominal Voltage: 1.5 volts; Nominal IR: 150 to 300 milliohms (fresh)Our No.1 Longest Lasting MAX AA ba... read more
(as of July 7, 2020 - More infoProduct prices and availability are accurate as of the date/time indicated and are subject to change. Any price and availability information displayed on [relevant Amazon Site(s), as applicable] at the time of purchase will apply to the purchase of this product.)

However, Romer still has other responsibilities. As we fly and engage in combat with enemies, we also have the power to heal your colleagues on the ground, as well as to give them specific orders.

Disintegration mixes FPS, Flight Simulator and RTS gameplay, in a mechanic that V1 Interactive has been able to implement in a very satisfactory way. 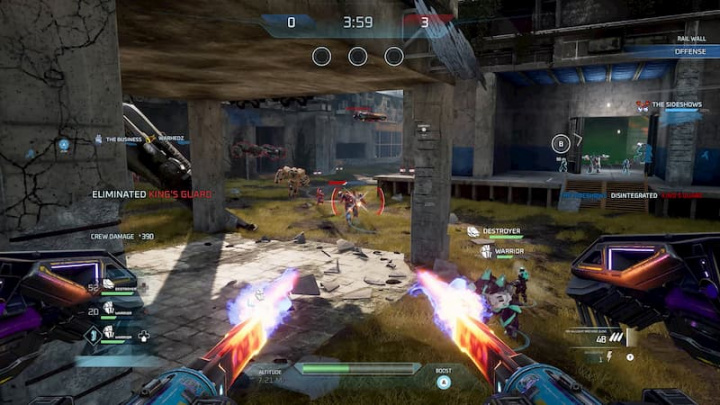 Each of our teammates, has a special attack that can only be invoked by the player: throw concussion grenades, shield creation that prevents attacks from enemies.

As far as the control of our companions is concerned, there are two main mechanics. On the one hand, of their movements, being done with the pressing of R1 in an area of the map, which makes everyone go there. It is still strange, however, that there is no chance of giving movement orders to a single one.

(36)
$17.95
SPECIAL INTRODUCTORY PRICE! SPORTS WATER BOTTLE INSULATED: Goodbye sweat! The double wall insulation makes the Iron Flask sweat-free! It keeps your dr... read more
(as of July 7, 2020 - More infoProduct prices and availability are accurate as of the date/time indicated and are subject to change. Any price and availability information displayed on [relevant Amazon Site(s), as applicable] at the time of purchase will apply to the purchase of this product.)

On the other hand, we can control the special attacks of each party member and here yes, individually. To do this, press the directional button for the mate and with R1 we select the target of the attack.

One problem that stubbornly persists is that it is difficult to point to a moving enemy to order an attack. When we fail to click (with R1), the wrong order is given for our companions to move even to the middle of the forces
Enemy.

The AI of our comrades is, in most cases, satisfactory. If we instruct them to stay in one place, they stay, or if we order them to attack an enemy they fulfill. Sometimes strange situations happen such as ordering a concussion grenade for a group of enemies, and instead of doing so in the distance, they approach as much as possible to almost hand it over.

(11)
$6.11
9-volt lithium battery (1-pack) provides reliable performance across a wide range of everyday devicesIdeal for digital cameras, handheld games, smart ... read more
(as of July 7, 2020 - More infoProduct prices and availability are accurate as of the date/time indicated and are subject to change. Any price and availability information displayed on [relevant Amazon Site(s), as applicable] at the time of purchase will apply to the purchase of this product.)

The GravCycle, on the other hand, can come equipped with various weapons (machine guns, rocket launchers,…). However, it will be a mistake to think that by itself, it can solve the fighting. GravCycle cannot handle much enemy firepower on its own and as such we must be able to properly use the skills of our comrades on the ground.

In addition, they are also important, because they are the ones who trigger various actions in the scenarios, such as, for example, releasing a prisoner, collecting resources…

Ammo is endless (both ours and teammates’ special attacks), but they have a cooldown time, so their use has to be weighed.

In general, enemies find themselves suitably challenging. The larger, armored ones “give the body to the bullets”, while snipers avoid close confrontation and the rest seek protection when they feel threatened. And when one of them is in trouble, there are others who help him repair himself in full combat.

(26868)
$29.99
Our revolutionary botanical serum boosts the length and thickness of eyelashes and eyebrows. The result is longer, fuller and thicker eyelashes and br... read more
(as of July 6, 2020 - More infoProduct prices and availability are accurate as of the date/time indicated and are subject to change. Any price and availability information displayed on [relevant Amazon Site(s), as applicable] at the time of purchase will apply to the purchase of this product.)

However, it’s always gratifying the feeling of eliminating an enemy and watching it explode, with its pieces being thrown in all directions. It’s liberating!

One thing that would be useful was gravcycle being able to zoom in, taking advantage of its ability to fly a little vertically and see a little further on the map.

And speaking of the maps, they are well designed (although they are totally linear) and well fed with details. More importantly, almost everything in them is destructible, thereby increasing the strategic component, especially when enemies fear keeping hidden.

(8005)
$19.24
Formulated with POWER BOOSTERNo pre-wash needed! Cascade Platinum PLUS+ dishwasher detergent removes burnt-on foodCascade Platinum PLUS+ ActionPacs di... read more
(as of July 7, 2020 - More infoProduct prices and availability are accurate as of the date/time indicated and are subject to change. Any price and availability information displayed on [relevant Amazon Site(s), as applicable] at the time of purchase will apply to the purchase of this product.)

A word for the extent of the maps that is large and, although they have checkpoints, they force to repeat long areas if we die, or any of our companions die. Yes, if a teammate falls in combat, we have 30 seconds to recover it. If we don’t, the mission ends there and we resume from the last checkpoint.

Scattered throughout the scenarios, there are nano-technology deposits that allow the “healing” of our companions. It is very important to know how to use this, because there are very long missions (more than 30 minutes) and with many opponents.

Disintegration is a game in which you have to look after all the members of the team. If one dies, they all lose. 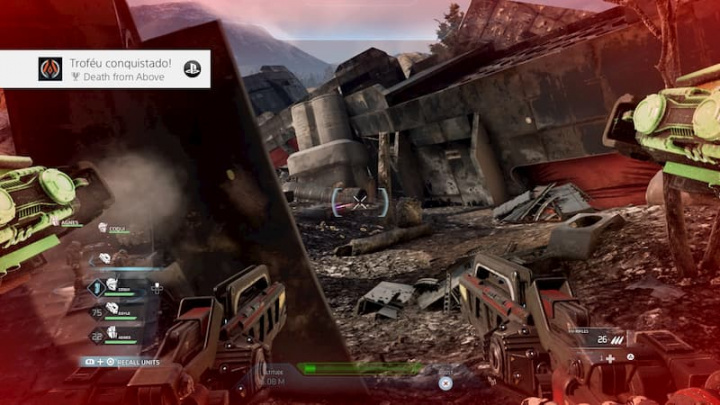 To praise the existence of a simple and effective tutorial that properly illustrates the main mechanics of the game.

The game is located in English, which is regrettable, because the characters of the game are quite extroverted and in the course of the missions go dropping some very funny shots.

Disintegration is a game with personality and that offers in a certain way, as Marcus Lehto intended, something different. With its successful mix of Real-Time Strategy mechanics, with Flight Simulation and First Person Shooter is a demanding but rewarding title that gives you pleasure to play.

It has some edges to settle, but done the math, we liked what we saw and played.