It’s amazing, but Red Dead Redemption 2 runs faster on Linux than on Windows

Although it has never managed to conquer its space, Linux is the closest system to Windows 10 and a possible replacement. The approximation between these systems has been uniquely linked, but they are still rivals in the market.

Linux was never a system prepared to be used in the gaming universe, but that didn’t stop it from evolving in this field. A recent test showed something that was deemed impossible. Red Dead Redemption 2 runs faster on Linux than on Windows 10.

Linux can be a paid gaming system?

It is undeniable that all the games and all the apps that gravitate in this universe are made for Windows. Being the system with the largest market share, natural that this attention is given, because Linux has never been connoted with games or other apps.

This has not prevented improvements in this area, especially in emulators that bring all that windows has to this system open and with a lot of potential. A test now conducted by FlightlessMango has left Linux in a prominent position, with Microsoft’s system far away.

This test was based on the game Red Dead Redemption 2 and evaluated its use on both Linux and Windows. In the case of the first, the emulator was used Proton, which is developed by Steam and based on the well-known Wine, to give Linux the ability to run this game.

Three distinct GPU drivers were also used on Linux, and compared to their performance with Windows, which used Vulkan and DirectX 12. The results are visible and show that the Vulkan API runs faster on Linux than Vulkan or DirectX 12 on Windows 10. There were even differences of 10 fps, with about 14% advantage for Linux. 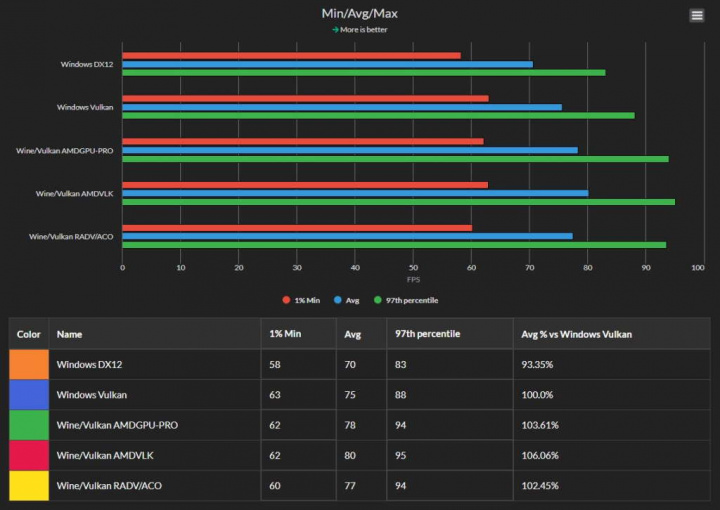 Windows did not resist this proposal of gaming

For testing, an Intel Core i7 8700K processor, 16 GB of RAM and an AMD Radeon Vega 56 graphics card were used. All of these components were connected to an Asus ROG Strix Z370E Gaming motherboard.

It is thus, once again, proven that this open system can compete directly and beat Windows 10. On other occasions this idea had been shown and detailed. The most curious thing about this test is to be used an emulator to run the game and still manage to be faster.