KB4549951: Problems return to Windows 10 and profiles that disappear

The latest Windows 10 updates have been a source of problems. Many are dedicated to solving problems, but end up bringing new ones that were not at all expected. This is what has happened with KB4549951, which continues to present problems.

This update is again at the center of more problems, with user profiles disappearing for no reason. The solution exists and is not complicated, but these problems should not even happen.

KB4549951 has been a source of problems since it was launched in mid-april. This update was initially created to address some serious issues in Windows 10, but it quickly showed its flaws.

(6024)
$8.99 (as of May 29, 2020 - More infoProduct prices and availability are accurate as of the date/time indicated and are subject to change. Any price and availability information displayed on [relevant Amazon Site(s), as applicable] at the time of purchase will apply to the purchase of this product.)

Complaints were in several areas, often leading to this being removed. The problems were with high resource consumption and blue screens, but there were also complaints of faults in Bluetooth and WiFi.

Now, there are new complaints from users who installed this update. According to the revealed, after this process, the user profiles disappear and are without any of the files present to be used.

In fact, the user's profile is present, but not being used. Microsoft recognized the problem and recommends that new profiles be created and that files be copied. There are also reports that several consecutive restarts solve the problem. 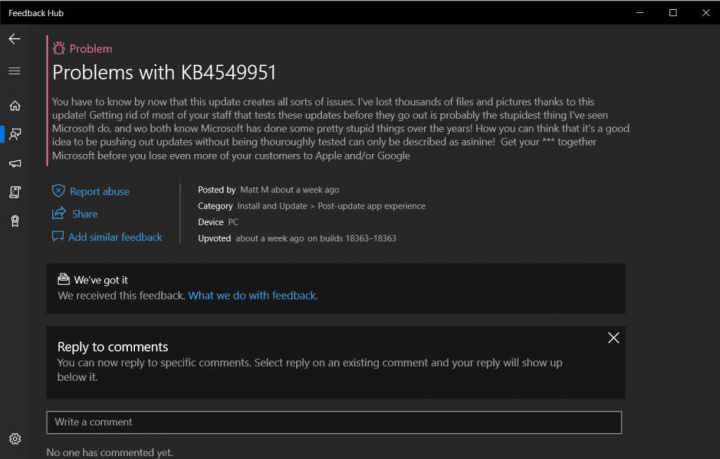 An old problem for Microsoft to solve

In fact, this behavior is not new in Windows 10 and has already brought serious situations. The October 2018 update had similar behavior and led Microsoft to discontinue its availability to users.

(12738)
$9.90 (as of May 29, 2020 - More infoProduct prices and availability are accurate as of the date/time indicated and are subject to change. Any price and availability information displayed on [relevant Amazon Site(s), as applicable] at the time of purchase will apply to the purchase of this product.)

With the May 2020 update about to be released, many users are on the receiving end. Everything points to it being free of problems, but also in other situations everything proved to be ok, and then serious problems arise.

Tip: See how you can postpone...

Here's what disappears or is discontinued...

Just arrived and Windows 10 May...