Microsoft again marks CCleaner as a dangerous app for Windows 10

CCleaner has been the tool of choice for Windows 10 users to clean the operating system. With a very simple use, you can remove everything that is too much in this system.

Microsoft, however, has never been very supportive of the use of these apps, for changing Windows 10 and its interior. Now, in an unexpected action, CCleaner is being marked as an unwanted app and is removing it from the systems.

CCleaner is now a PUA app

Whenever it was necessary to remove unnecessary temporary files and optimize a Windows 10, the app called was CCleaner. With a simple interface and very practical to use, it is a logical option for users.

Microsoft has now decided to mark CCleaner as a PUA (potentially unwanted application) and try to eliminate all files in the app on Windows 10. There is no explanation for this position, but started to be marked as PUA: Win32 / CCleaner by Windows Defender.

The most likely cause for this new scenario will be mainly in the registry cleaning features of Windows 10. Microsoft has already reported that this type of apps should not be used, in order not to jeopardize the integrity of the operating system.

In fact, earlier, Microsoft had marked the service as unwanted. In two different situations, this position was taken, almost always with the same justification. One was blacklisted for their domains on the support forums and the other was simply not recommended. 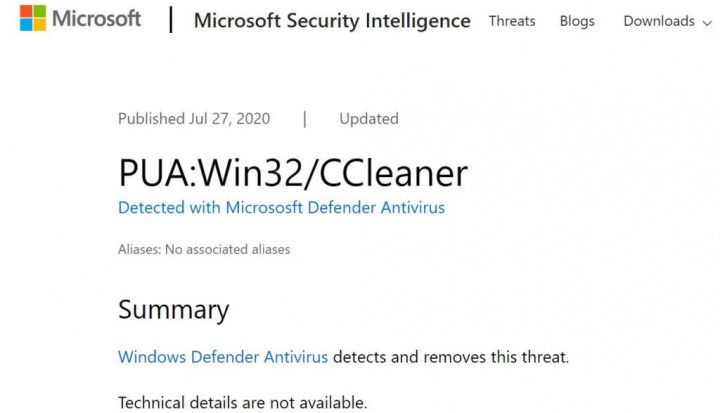 Of course, CCleaner has also not been far from serious and potentially dangerous security problems for users. In 2018 malware was discovered in one of the versions that were available, which was later installed on many computers.

This appears to be an irreversible decision. Microsoft already has Windows Defender removing CCleaner from Windows 10, so the app will raise alarms and will not run on this system in the future.