More and more cars bring greater interaction with smartphones in the act of driving. It is also true that the vehicles bring more driving assistance technology. However, one study says that using entertainment systems, like Apple's CarPlay, impairs driver reaction time more than cannabis.

The study considered the driving uses of Apple's CarPlay, Google's Android Auto, messages on the phone, using the voice on the phone, among others.

Basically what was compared and tested was the driver's reaction when using certain devices during the act of driving. In addition, they added the reaction time of the person who is behind the wheel and is under the influence of a drug, cannabis.

But what is CarPlay?

For understand what you're talking about, according to Apple, CarPlay (and the same Google system, Android Auto) is a smart and safe way for drivers to use their iPhone while driving. This system offers a panel with music suggestions, traffic apps, the Siri virtual assistant, calendar application, as well as several other services in the form of an application.

However, according to the company iAM RoadSmart:

The worrying results of the investigations carried out by IAM RoadSmart show that the latest information and entertainment systems for vehicles affect the reaction time behind the wheel more than the use of alcohol and cannabis.

Among the shocking results, the study – conducted by TRL on behalf of IAM RoadSmart, FIA and the Rees Jeffreys Road Fund – found that reaction times at road speeds increased the average braking distances between four and five cars, drivers they took their eyes off the road for 16 seconds while driving and touch control on the screens resulted in even worse reaction times than sending text messages while driving.

As can be seen in the graph below, the use of these solutions that have multiple choices can be more problematic than the use of prohibited substances. This, of course, in the chapter of distraction while driving. Another fact to remember is that the use of voice, with virtual assistants, such as Apple's Siri or Google Assistent, may help, but they will not be the solution. There will continue to be distraction. 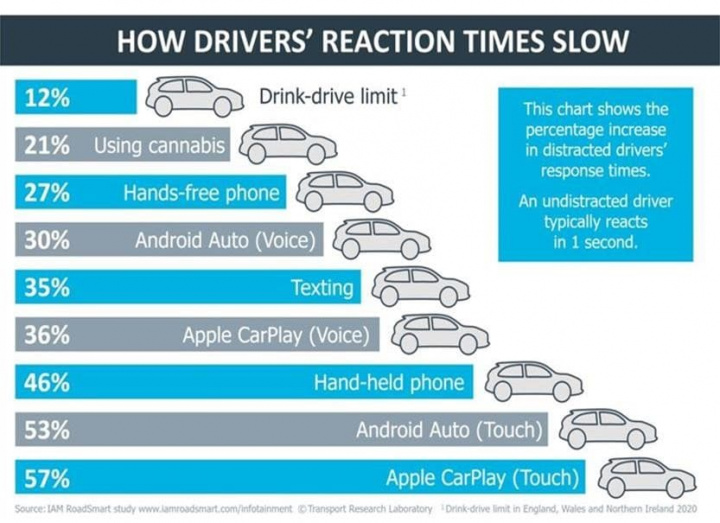 Reaction in driving worse than driving with alcohol effect

In addition to what was reported in comparative terms, the study also states that the use of Apple's CarPlay touchscreen will reduce driver reaction time by 57%. In fact, it's worse than using a phone in your hand. In addition, they also stated that the execution of navigation tasks with CarPlay can result in a deviation of the range of up to 0.50M.

With the evolution of technology, certain more problematic points will be taken to another level. This is because cars already have assisted driving technology, but that does not invalidate the driver's full attention. More entertainment can mean less attention, which can be an increasing cause of road accidents.

Despite being an American study, the penetration in Portugal of these technologies is increasing. In this sense, the data and the incidence of hazards are perfectly suited to our market.