Home Reviews Through the Darkest of Times (PC) Review

Through the Darkest of Times (PC) Review

First of all, I have to admit that talking about any game related to World War II or related to Nazism is complicated and delicate.

Throught the Darkest of Times unfolds after “Adolf Hitler became Chancellor” in 1933. Our protagonist is the leader of a group that aims to create a revolution with the Nazi regime.

There are two game modes, Story Mode and Resistance Mode, basically the biggest difference between the two modes is increasing the difficulty and the possibility of going back to a checkpoint or not, this is in case we lose some character and we want to go back with the our decision.

Regarding the two modes, I have to say that I expected more differences.

This is a Turn-Based, where at the beginning of each shift we have to decide how to allocate our resources and resistance members in the different activities, this is where the game becomes more interesting, depending on our choice of activities we will have benefits or we can having several problems like being arrested.

Initially we only have the protagonist and his two allies as resources that we must use in order to raise funds, sponsorship and new members of the resistance while trying to be discreet.

Regarding the mechanics of the game Moral should be one of the most important, we must always be aware of this indicator, as it can change quickly. At the start of the shift we have a subtraction in our morale due to the pressure imposed by the regime.

Through the completion of missions we will be able to increase our morale and thus improve our team and even acquire new members, with more morale we will also unlock new activities and missions, such as the possibility of getting someone out of jail.

But if we fail missions, or get caught, or killed in action, morale will drop sharply, greatly increasing the difficulty of the game and even causing our teammates to give up the resistance.

During missions or at the end of the shift if we find soldiers we will be presented with some options like “Fight, Hide or Run”, or even more to get, for example, more information.

We can try to attack the soldiers and make them flee the area so that we can complete the mission, but when attacking the soldiers, we will be marked as enemies of the regime.

Or we can even be defeated, or imprisoned, or even die. Which will greatly decrease our morale.

If we try to go unnoticed, we have a chance of being seen and even failing the mission, however, it is much more likely to be able to finish the mission than if we choose to Fight.

The last option is usually always to flee, in which case we will not be able to complete the mission, but it is also very likely that we will not be seen or caught by the army. 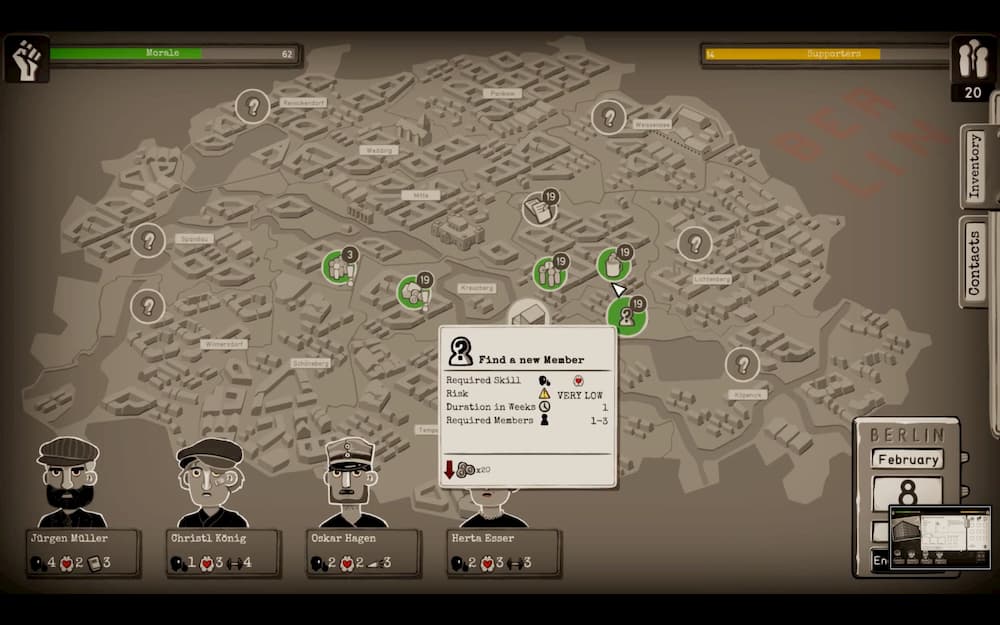 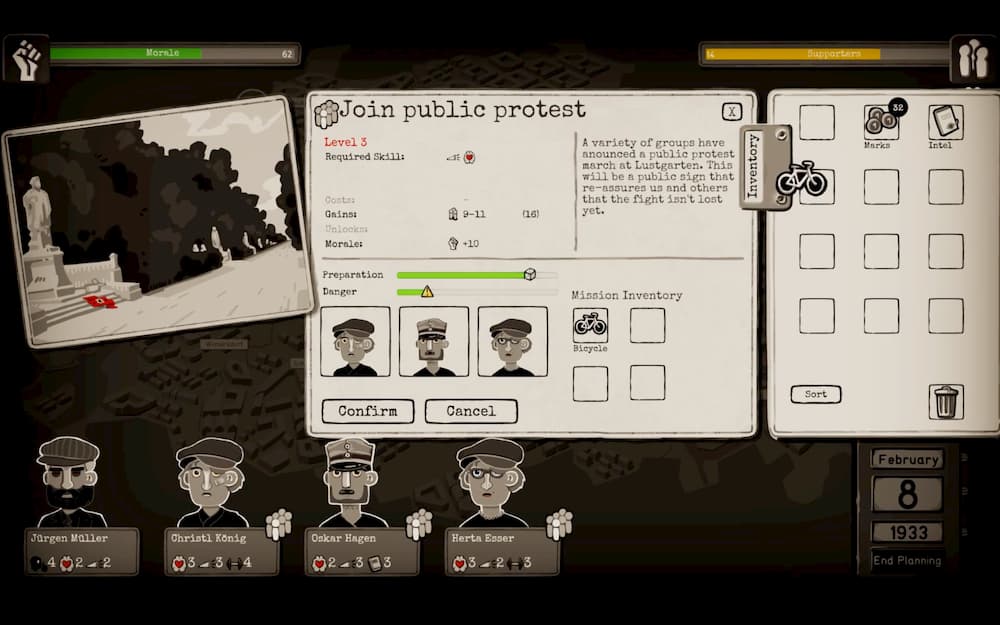 I'm not a big fan of this type of design or art, the images seem to be made by hand, but they also have a rough format, I like realism more and unfortunately I wasn't a fan.

One of the details that I really liked was that all the texts were made with typewriters, it gives an old feel to the game. I found the sound part of the game very good, I think that the attempt to create a heavy atmosphere in the game was very well achieved with the sound of it.

I have to admit that I didn't get a good impression at the beginning of the game, perhaps because of the game's art, or because of the theme of the game. But as the game progressed, I became more and more fond of the necessary strategy and even the part of learning history with the game.

Overall, it's a good strategy game, but I would have liked to have seen more resource management options.

Through the Darkest of Times