Update on Windows 10 is preventing Windows Defender from working …

Windows Defender is today one of the most used protection tools in the Windows universe. This antivirus has finally reached the expected maturity and is able to compete in a market with more and more offers.

For it is precisely this element essential to Windows 10 that is now in serious trouble. After an update, it presents problems and interrupts the analysis, without the users knowing if they have an infected file.

A problem in Windows Defender

With the arrival of Windows 10, Microsoft decided to invest in the renewal of its security solution. Windows Defender is today one of the most used proposals and one of the most protection offers to the users of this system.

According to information that has now emerged, there is a problem in Windows Defender that prevents it from working correctly. Complaints begin to accumulate and users, however, do not know whether or not they are protected from problems.

User safety is at stake

From what is described, whenever an analysis is made of the files present, it is interrupted after a few minutes. This process happens with an indication that an item has not been evaluated and that there are no threats to the operating system.

The list of these elements that have not been evaluated is not accessible and, therefore, users are in doubt if the problem is real or if it is a system failure. This problem is limited to Windows 10 and appeared in version 4.18.2003 of Windows Defender, when Microsoft tried to solve other problems. 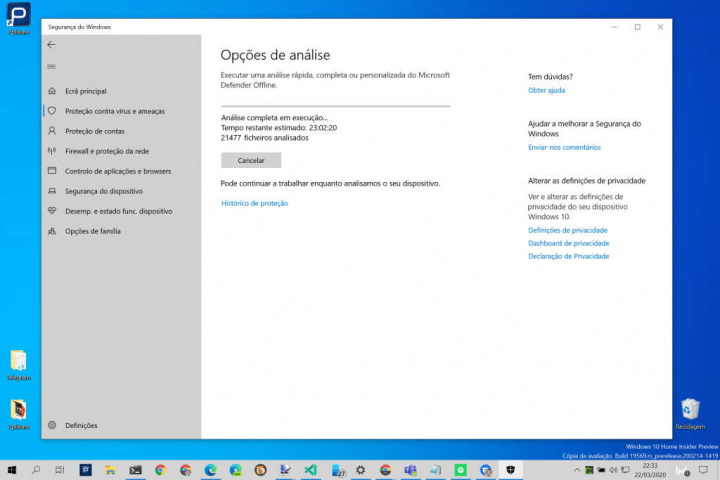 A problem that only affects Windows 10

According to the error presented, there is a file exclusion, which in reality does not exist. There is also the possibility of a wrong configuration in the network analysis settings, which leads to the problem to arise.

It remains to be seen whether this is a real problem or just an error message that appears for no reason. Microsoft should eventually address this issue. Until then, the solution is offline analysis, which does not show this problem.